Honestly before starting this i never believed that creativity can be taught. I thought just it is an innate talent. I chose to take this course to figure out whether this idea is true or not. However, at the end of module one I discovered that my way of thinking has changed.

One of the activities that we made was redesigning a gift giving empathy. In this challenge we were asked to make an interview with a partner to know how he loves present , and what are his needs. Then to make a new idea of a present for him. This was our first challenge to think outside the box, and to come up with creative ides. The next task was making a creative CV. In the ordinary CVS people are asked to write about their certificates, experiences, etc.. but in this CV we were asked to write things about ourselves that distinguish us. In this task I tried to think deeply on myself to know what are the unique features about me. This challenge not only  helped me to think and write in a creative way , but also helped me to notice a few things about me that I didn’t notice before. Another task was the ”Time Capsule” . In this task we were asked to imagine that some people in the future will find a time capsule contains things from our time , so what should we put on it. Therefore, I decided that I would put the things that it shows how we lived. I think this challenge helped me to enhance my imagination. Then we come to the data app pitch. I think this was one of the most interesting tasks that we took. Designing an idea for an app for the food bank. The process of making an idea and prototype the app was very enjoyable. In this task particularly I learned not to differ judgement , and not saying that an idea is silly. That’s because every idea leads to a better idea. Next we have the empathy map in which we had to identify one of the most problems that faces students in the college, what he think and feel , and a solution for it. This challenge was quite easy because this problem is touching me also as a student , and when I asked another student about his problem I found that it was the same of my problem so this enables me to understand his thoughts and feelings, and I think i manged to find a solution for it. Padlet thinking resources was also a task for us in which we have to find some resources about what is design thinking. In this task I watched some videos and read some articles about this topics which enabled me to know more about design thinking especially, that I didn’t know about it before. Then we have this bonus assignment for designing a new present for the mother’s day. It was also an interesting task especially because I did a surprise for my mother in the mother’s day. Since the beginning of the semester we were watching videos about what is creativity , how to be creative and what struggle people from being creative , and we had to write reflections about these videos which helped me to understand the process of creativity well and these reflections these ideas to stick to my mind.By finishing the first module I can admit that I gained a lot of experience and I really enjoyed attending this class. 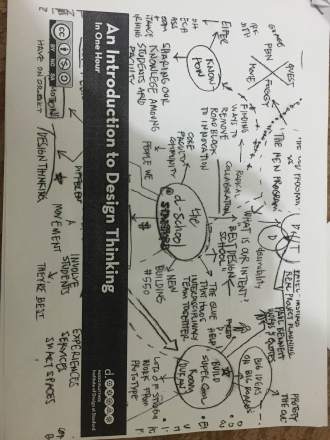 Me and my team met a few times to work in this problems. Every idea we were thinking about was leading us to a greater idea.

By this way people who take the boxes will know easily if these were opened before or not.

For the organization who will still open and distribute the boxes , we decided to make a HOTLINE  which will enable people who will find their food boxes open to inform about these organizations. 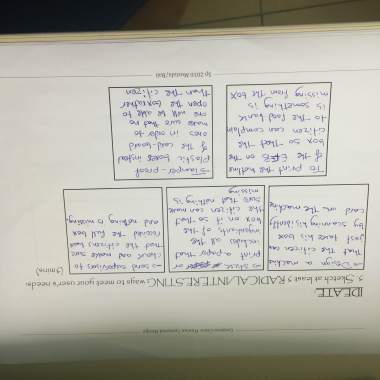